Due to the damage recently caused by typhoons and flooding, Chinese corn production is projected at 260 MMT, slightly above the five-year average of 259 MMT. However, there are also reports that their corn reserves are quickly dwindling with increased demand, particularly for livestock feed. USDA currently projects Chinese corn beginning supplies just under 201 MMT, about 7 MMT lower than projections first reported in May 2020. For years, China had been building reserves of corn in efforts to become more self-sufficient, as shown by a surplus of corn production compared to domestic corn consumption occurring between 2011 and 2017, when China held its largest surplus of corn production compared to domestic consumption of 43.7 MMT. While the Chinese stocks-to-use ratio rose to 93% in 2015, it was still less than the peak of 112% in 1996. 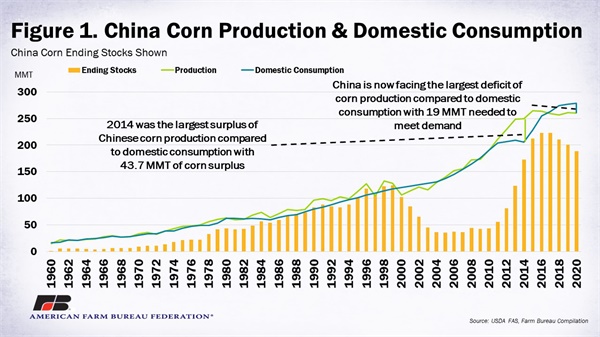 China needs a significant amount of corn to feed its hog, dairy and poultry industries. And with its battle with African Swine Fever, which arrived in August 2018, China is looking to repopulate the hog herds lost to the disease. Before ASF, given the size of China’s herd, hog feed dominated the feed consumption market. Though the herd population and hog production are recovering faster than most expected, China has a production loss of almost 33% to make up for. Structural changes to the industry, which could be a result of a shift away from “backyard”-style farms toward larger commercial operations, could also change feed consumption.

These circumstances are causing Chinese corn prices to climb to record levels as demand increases and supply tightens, making lower-priced imported corn more appealing. Figure 2 highlights the daily closing prices of Chinese corn. Another incentive to import U.S. corn is China’s commitments made in the Phase 1 trade deal and the mad dash to meet them before the end of the calendar year.